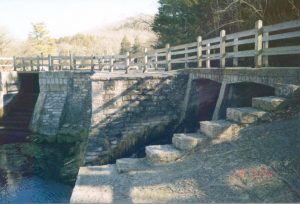 Palmerton & Parrish, Inc. (PPI) was founded as an Engineering Corporation in the State of Missouri in January 1989 by Mr. Fred Palmerton, P.E., President, and Mr. Brad Parrish, P.E., Vice President.  PPI established satellite Offices in Branson, Missouri and Joplin, Missouri in 1990 and 1991, respectively.  Mr. Mike Andress was PPI’s third employee in 1989, and managed PPI’s Branson’s office from 1990 till his retirement at the end of 2016.

Mr. Ron Abbiatti, R.G., joined PPI in early 1990 and spent the majority of his career with PPI as the Joplin Office Manager till his retirement in 2008.  Mr. Palmerton, Mr. Parrish, Mr. Andress, and Mr. Abbiatti comprised PPI’s original Board of Directors.  Mr. Mike Foley joined PPI in 1991, and has spent his career with PPI in the Construction Materials Testing Department. 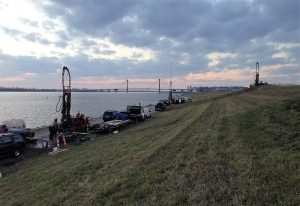 In 2004, Mr. Brad Parrish assumed the role of Company President and Mr. Palmerton became Vice President, as was planned at the time of the Company’s original founding.

PPI completed several keynote Projects in the 2000s, including the Branson Landing Development, and Downstream Casino in Quapaw, Oklahoma.  In 2009, PPI opened a satellite Office in Tulsa, Oklahoma in response to requests from Clients to extend our services from Northeast Oklahoma further into the State. 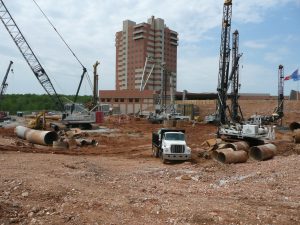 PPI was well-positioned when the recession affected the Construction Industry from 2010 to 2012.  With a large volume of subsurface drilling work, PPI transitioned many of our Construction Materials Technicians to work in the Subsurface Drilling Department during the recession, and continued to add resources to our drilling fleet with the addition of an ATV-mounted  2010 CME 550X.  PPI emerged from the recession with no layoffs, and all of our long-time staff and accumulated expertise in tact.  PPI hit the ground running as the Construction Industry turned around in 2013 and 2014.

In January 2013, Brandon Parrish, P.E., Brad’s son, assumed the role of Vice President.  Brandon grew up working in the business, and is a 2005 and 2006 graduate of the University of Missouri, with a Bachelor and Master of Science in Civil Engineering.  His Master’s Thesis was entitled “Geotextile Wrap-Face Wall Using Marginal Backfill”.  Mr. Palmerton, P.E. transitioned to part-time employment during 2013 as the Company prepared for a new chapter in Company Ownership and Management Structure. 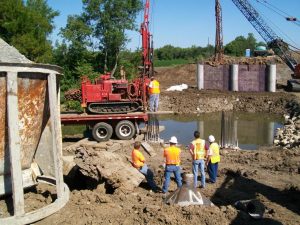 Since 2014, PPI has continued to grow and reinvest in our Company’s resources to better serve our Clients.  Notable additions to PPI’s drilling and subsurface investigation capabilities include: new 2014 CME 55 and 2015 CME 55 track-mounted drill rigs; a 2008 CME 55LC track-mounted drill rig, which allows PPI to drill, sample soil, and core rock with as little as 8 feet of overhead clearance; a new portable Big Beaver auger drill that can fit through a doorway and drill with as little as 14 feet overhead clearance; a vacuum excavation trailer; and a new, ChemGrout Grout Plant with a 44 gallon per minute (GPM) flow rate.

Ms. Erin Parrish, PhD joined PPI as Company Administrator in 2017, and formally joined PPI’s Board of Directors in the Summer of 2019.  Since joining the Company, Dr. Parrish has implemented many improvements to streamline PPI’s business operations, increase PPI’s use of technology, and improve PPI’s Company Safety Program.

PPI celebrated 30 years in business on January 30, 2019.  2019 was a record year for PPI in more ways than one, as we continued to serve many Legacy Clients, develop new Client relationships, reinvest in the Company’s resources, and expand our geographic service area.  PPI expanded our service capabilities with the acquisition of two (2) new track-mounted drill rigs (a 2019 Diedrich D50 and a 2019 CME 55-300), addition of aerial drone services, investment into more Ground Penetrating Radar (GPR) equipment, additional staff training in Non-Destructive Testing (NDT) of structural steel, and the procurement of Electrical Resistivity Tomography (ERT) equipment.

PPI Elects a New President in 2021

TRIBUTE TO PPI’S PAST PRESIDENTS

Mr. Brad Parrish, P.E. co-founded PPI in Springfield, Missouri in January 1989, and served as PPI’s President from 2004 until his retirement in 2021.  Mr. Parrish is an alumni of the Missouri University of Science and Technology, having earned his Bachelor of Science and Master of Science in Civil Engineering in 1977 and 1978 (Geotechnical Emphasis).

Mr. Parrish is a native of Greene County, and a graduate of Willard High School.  Under his leadership, PPI grew to include a full-time staff of over 50 employees, four offices, extensive laboratory testing capabilities, and drilling resources that are unmatched for a Company of PPI’s size.

Mr. Parrish’s credentials include Professional Engineering Licenses in Missouri, Kansas, Oklahoma, and Arkansas; Certified Welding Inspector (CWI); registration as a Kansas Water Well Contractor; and a Restricted Monitoring Well Installer License in Missouri.  Mr. Parrish has served as a local and state Officer for the Missouri Society of Professional Engineers, in various capacities for the American Council of Engineering Companies (ACEC), and is a member of the Academy of Civil Engineers at the Missouri University of Science and Technology. 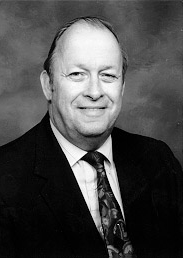 Throughout his career at PPI, Mr. Palmerton helped establish the Company’s reputation as a leader in Geotechnical Engineering and Construction Materials, with particular expertise in Concrete and Asphalt Pavement, Sinkhole Remediation, Drilled Pier Design and Construction, and other fields.

Mr. Palmerton served as State MSPE/PEPP Chairman in 1987-1988, State MSPE President in 1997-1998, and National NSPE/PEPP Chairman in 2004-2005.  In 1992, he was awarded the NSPE/PEPP National Merit Award for Contribution to Private Practice, and in 2002 he received the NSPE/PEPP Outstanding Service Award.  He is an NSPE Fellow and a member of the MSPE Hall of Fame.  He was honored with the Lifetime Achievement Award from the Springfield Contractor’s Association (SCA) at the 2019 salute to Design & Construction Awards Banquet.

Mr. Palmerton has been heavily involved in the evolution of Storm Water Regulation at the City of Springfield.  In his spare time, Mr. Palmerton is an active member of the congregation at Hillcrest Presbyterian Church in Springfield, and devotes many hours of service to the Council of Churches of the Ozarks and other community causes.  Fred celebrated 40 years of marriage with his wife RaeJean in 2017, and is enjoying his retirement.